Ahh, Thanksgiving, the time for families and friends to get together, eat great food and create wonderful memories… and share embarrassing stories about you!  And there’s always one loving family member who’s happy to tell it, every year, right?  And laughter ensues, and you halfway laugh and roll your eyes, thinking, “I’m so tired of this story.  I really need to do something even more embarrassing, just to have something else to talk about at Thanksgiving.”  My favorite storyteller is my brother, Criss.  He always adds his special flavor to it. Here’s a photo from about that time.  From left to right, Dad, Criss, my oldest brother, Lee (not on the trip), and me. 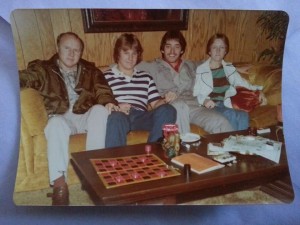 But then, the years melt away, and there are fewer family members to gather together, or perhaps even, as in my case, the place you gathered for all of that laughter and embarrassment no longer exists.  Suddenly, that embarrassing story is something you long for.  As I was preparing my Thanksgiving meal yesterday, I began to miss my embarrassing story, so I decided I’d tell it on myself.  This one’s for the Zebert family, and for those of you who are either rolling your eyes, wishing for a time that story isn’t told, or feeling as if you’d give anything to hear it again. Thanksgiving of 1979, when I was 19, my dad wanted to take a trip to Indiana to visit my Great Aunt Marj.  Oh, joy!  I loved Aunt Marj, but I didn’t want to go because, A, I had a boyfriend I was pretty serious about; and B, I hate cold weather!  Let me say that one more time.  I hate cold weather!  Regardless, Dad insisted, and the family piled in the custom van to head to Lynn, Indiana from Pearl, Mississippi, which was a really long drive.  It was a full, but comfortable load, including Dad, my brother Criss (17),  Aunt Nellie, Uncle Dale, Aunt Sara, and cousins Donny (20) and Allen (16). The trip up and the holiday meal was uneventful, unless you count Aunt Marj asking Dad, during breakfast, how his bowel function was.  I wanted to laugh about that, but given Dad’s rules about inappropriate meal talk, and seeing the look on his face after the question, I didn’t dare.  The food was amazing, and there was a ton of it.  The family time was loads of fun, with a shopping trip in the mix, where Dad bought a Russian-style winter hat (super cool and expensive), along with other things for us. But it was time to make the trip back home, and I was really happy about getting back to my boyfriend and WARMER WEATHER!  We all piled into the van and headed south.  It was really early in the morning — dark-thirty, I call it — because that’s the way my dad liked to travel.  And unplanned stopping was never on the agenda during any trip with him.  (Take note of this for what’s about to come.)  I’d taken my seat between Uncle Dale and Aunt Sara in the very back of the van.  Aunt Nellie and Donny were in the swivel chairs in the second row, with Allen on the floor beneath them, asleep.  Dad was driving, with his new Russian hat on the floor just behind the center console, for easy retrieval when gassing up the car in the cold, and Criss had called “shotgun.” As we got a few hours into the trip, I started to feel a little queasy and told my uncle.  He said, “You know, it’s morning.”  I said, “Yeah.”  He added, “And you’re queasy.”  I said, “Yeah.”  Of course, I had no idea what he was talking about, but in his usual joking way, he said, “Do we need to be worried about a new family member?”  OMG, huge eye roll!  My queasiness wouldn’t even let me pretend to be amused, and Aunt Sara said, “Stop, Dale.  Kathy, why don’t you move to the middle seats?  Maybe the bouncing around in the back is making you feel that way.”  Excellent idea, I thought, and exchanged seats with Aunt Nellie, who was sitting next to the sliding door. A few minutes later, I realized the seat wasn’t making a difference and said, “Dad, can you pull off at the next exit?  I’m not feeling well.”  He said, “Sure, Baby Girl.  Next exit.”  The next exit came and went, and as we passed it, I said, “Dad…”  Too late!  I tried to stop it.  I really did, but the body knows what it needs to do, and that was that.  Of course, when we’re sick, we’re not really strategically planning where we’re going to throw up.  There was no trash can available.  There was only the floor… I mean, Allen’s leg.  Oops!  Almost simultaneously, my dad is yelling, “Move my hat!  Baby Girl, throw up the other way!”  Criss quickly retrieved the hat so that Dad wouldn’t wreck the van to get it. And as the excitement began to die down and I was handed a paper towel, Allen began to wake up.  But not knowing exactly what had landed on his jean-covered legs, he said very sarcastically, “That’s just great, Kathy.”  He thought I’d spilled coffee on him… until we pulled off at the next exit and he could see in the lights of the gas station that it wasn’t, indeed, coffee.  Uncle Dale said he’d never seen anybody come out of their clothes that quickly.  Sorry, Allen.  Nearly 40 years later, I still really am. I was given the proverbial Sprite, everyone was all calm and cleaned up, and we headed off on our path again.  A few swigs of Sprite and a few miles later, I said, “Dad…” — funny, I got a different response this time.  He said, “Pulling off now, Baby Girl.”  This time, I only had to apologize to the cold ground in Tennessee, and thankfully, the rest of the trip was uneventful. Well, that’s ONE of my embarrassing stories.  This story has been told for many years, and as I said earlier, I miss it.  I miss it because four of the people in that van are no longer here with us.  I’ve had to say good-bye to Allen, then Uncle Dale, Aunt Sara, and Dad, all within the last ten years.  Saying good-bye is tough, no matter what, but families are about stories created together, embarrassing or not.  And the ones that make you laugh decades later, even when they don’t at the time, are the best ones EVER. So I hope you laughed at this story.  Telling it made me miss it less.  What’s your favorite Thanksgiving funny story?  I’d love to hear it!